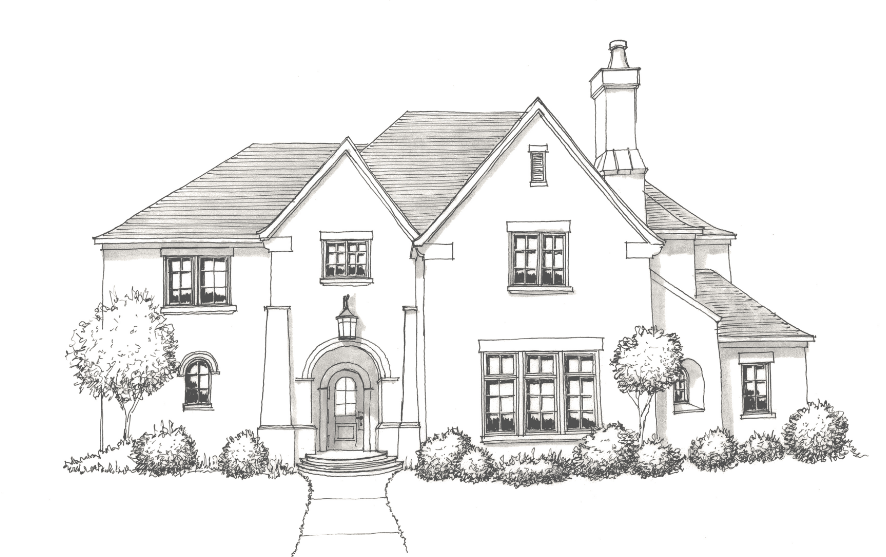 This is the 1st post to the new blog home, which is now fully integrated into our recently revamped company web site. If you’ve come across this post via a search engine, please take a look around at our company.

In this post, I wanted to talk a bit about the Arts and Crafts movement, and how that has impacted Architecture. The movement began in England in the mid 1800’s. Philosophers and artisans began to feel that the increasing use of the machine and mass production techniques were taking away for the aesthetic nature of things that were hand crafted. Prints, rugs, ceramics, wallpaper, furniture and architectural details were all disciplines that came together to start this movement, originally in England.

Names like John Ruskin and William Morris (whose drawing is above for a wallpaper pattern that he designed) were foremost in the movement. The intention was that everything that went into a house (including the house itself) would be artfully made, and add to the aesthetics of the work as a whole. William Morris designed and built his own house, but without any background in architectural design, it wasn’t a huge success (though it did work as a blank canvas on which to show off other crafts).

The movement was intended to be a style for the masses, but the reality is that the works of art took so much time and effort (and thus cost), it naturally wound up becoming much more of an “aristocratic” style for the wealthy. The forms of the architecture, (while allowing a fair amount of freedom in it’s expression) drew heavily from the Medieval age of Britain, a time when the peasant evolved into the craftsman who created great works of art such as cathedrals and palaces of the era.

One such architect was Charles Edwin Lutyens (1869-1944), who explored merging classical design and proportions with the medieval forms of the Tudor Revival style. Below is a small office building done for the Daneshill Brick and Tile Company.

Lutyens classical influences can be seen on the symmetrical nature of the design, but note the expressive and elaborate design of the chimney as well as the decorative false baluster across the top of the wall. Beautifully proportioned, simple massing, yet exquisitely detailed. This came to embody the Arts and Crafts movement as it grew in popularity across much of England until the early 1900’s.

Another noted architect of the movement was C.F.A Voysey (1857-1941), who took the architectural forms the medieval period and brought a clean, modern aesthetic to them. Preferring smooth, stucco and plastered exteriors over exposed masonry, he was quite ahead of his time, and his works even today could be considered what we call “transitional”.

Note the double gable of the lower image, and the angled, sloping corners. The ribbon windows are very much consistent with the Tudor Revival style, yet the overall feel of this house reveals it to be something different.

Once this movement crossed the ocean and came to American in the early 1900’s, it evolved into other architectural expressions, such as the Prairie Style (in the Midwest) and the Craftsman (or Bungalow) Style (in California). Both of these became quite popular in their own right and spread across the country.

But there is something quite interesting to me about the English expression of the Arts and Crafts style; the way it merges traditional, classical architecture with new, creative details and a modern flair that I find appealing, even though we are speaking of buildings that were designed and built over 100 years ago. While there was not much of the style produced and built here in America pre-WWII, we are finding a rediscovery of this architecture, and new traditionalists (such as our office) are creating new works based on this style (even here in Texas).

One such project for our office is currently on the drawing boards for a property in Colleyville, Texas. An early sketch of the exterior is shown below here:

The design, like the works of Voysey, will be a stucco exterior and merge a more “clean”, modern look with the traditional forms of Tudor Revival style. I’ve personally found it quite rewarding to research and attempt to recreate this style in the finest traditions of the Arts and Crafts movement.